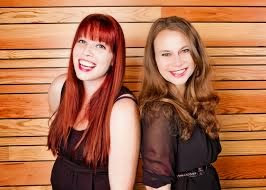 ATX Television Festival will have the look and feel of a film festival, but feature classic TV shows, never aired pilots, cancelled too soon series, cult favorites as well as current hits and premieres of new series. And while I have been profiling some of the featured participants, I have yet to tell you about the masterminds behind the ATX Fest.

Pals Caitlin McFarland and Emily Gipson are the ladies launching this inaugural homage to TV. Both are veterans in the film and TV industry. They also know festivals and have been involved with Sundance, Tribeca and Doha Tribeca.

Here’s a bit about more the dynamic duo.

Caitlin:  Honestly, my completely accidental niche is working for female directors. Betty Thomas, Nora Ephron, and Mira Nair were my mentors and introduction to the film/TV world — worked for them on pilots, series, and features.

Emily:  I studied film in college and moved to LA right after to work in film, but most of my time was spent on the studio (Fox TV Studios) and network (Discovery Channel/TLC) side of television.

ATXgossip: What made you want to start this festival?

Caitlin: The fact that there was a lack of festivals for television…a lack of recognition, really.

Emily: We both love the festival atmosphere, we call it camp for grown-ups. This was the perfect way to combine two of our favorite things (festivals and TV) into one.

Caitlin:  Why not?  Austin is no stranger to a festival and we couldn’t think of anywhere else we’d rather spend our time.

ATXgossip: What’s your favorite Texas based movie or TV show?

Emily: Friday Night Lights, no contest. I also thought My Generation was great and wished it had been given a chance. As far as movies, The Last Picture Show and Giant.

ATXgossip: What are some of your fave shows on TV right now?

Caitlin: Parenthood. I know it’s not on RIGHT now, but it should be.

Emily:  I second Parenthood, but I’m also addicted to Vampire Diaries and Revenge.

ATXgossip: What’s your dream get for the Fest?

Caitlin:  So many, but if we’re picking just one, J.J. Abrams.

ATXgossip: Give me one word to describe the festival weekend.