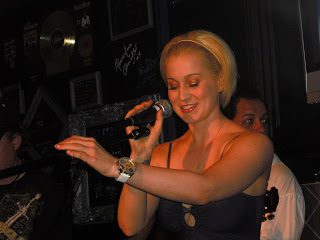 Kellie Pickler visited Austin on Thursday to perform at the opening of the Samuels Diamonds Live Music Lounge at the Clear Channel Studios. She also taped an interview with KASE 101.
The former American Idol season five contestant is nominated for a CMA Award for her duet with Taylor Swift, who’s currently wrapping up a nation-wide tour.
Samuels Diamonds presented Kellie with a special diamond studded star necklace which she immediately donned.
Kellie sang approximately seven songs including Angel which she wrote for her grandmother and I Wonder which was written about her estranged mother.
Between songs, Kellie took questions and told stories, including one about the tattoo on her left foot which she got the last time she visited Austin (she also woke up with a nose ring).