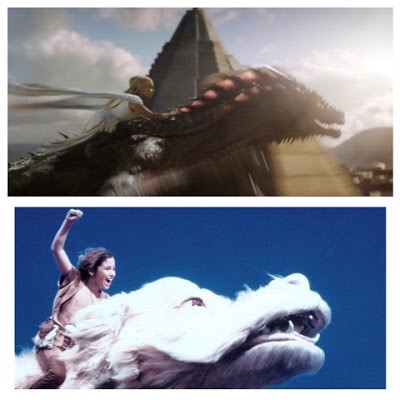 While watching Game of Thrones, I couldn’t help but imagine many of the cast as certain characters made famous in the 80s.

I know I’m not the only one who thought of Atreyu as Daenerys took to the skies on the back of Drogon. However, she’s not alone in her likeness to a classic 80’s reference.

May I present to you my very favorite blog post I’ve ever written; the re-imagining of Game of Thrones Season 5 characters as 80’s icons.

Ever in love with the leading lady, Jorah Mormont is Pretty in Pink‘s Duckie.

As the one who actually gets to be her lover (and who takes down anyone in his way on the rise to power), Daario is Bud Fox from Wall Street.

Tyrion Lannister is Alf. Yep, I said it. It’s not just because of his size. Despite the problems and inconveniences Alf brings to his family’s lives, they grow to love him.

Plus, they both easily adapt to new surroundings and always have the best wisecracks.

While Brienne of Tarth comes off as a beast of a warrior, we know she’s a softie when it really comes down to it. That’s why I liken her to William “The Refrigerator” Perry.

She may be large but she’s no dumb cookie.

Quickly learning to become a compulsive liar, Arya, while not a basket case, IS a reclusive outcast.

The Breakfast Club‘s Allison Reynolds is her soul sister.

As for Arya’s real sister, Sansa is most like “The Princess” Claire. The red hair helps, of course, but let’s not even go there with the pristine virgin thing.

It was difficult to find an 80’s character as evil as Ramsay Bolton. The best I can do is Johnny from Karate Kid, as Ramsay’s pops is most definitely akin to John Kreese.

Brainwashed by the mini Bolton, Reek is a lot like Ferris Bueller’s most loyal follower Cameron Frye. He tries to stand up to Ferris, but then this happens:

Now let’s talk about how Sansa ended up in this predicament to begin with. It’s that damn Little Finger’s fault.

Always in search of the best deal, Star Wars smuggler Lando Calrissian is his dopelganger.

Jon Snow is the best around. Nothing’s gonna ever bring him down.

After some tough training, this bastard grew to become the leader of the Night’s Watch. And while we’ve witnessed him take out creepy ass White Walkers, we’ve also seen him show his enemies mercy, much like Daniel Larusso.

Samwell Tarly is Barf from Spaceballs. Honestly, this choice is simply for the fact that I wanted to include Barf. Nothing more, nothing less.

The White Walker leader (whoever that may be at the time) is One Eyed Willie and his squad is the equivalent of a band of pirates.

Actually, they could be Goonies. After all, Goonies never say die!

Aemon Targaryn is the all knowing Maester of Castle Black, much like Fraggle Rock‘s Marjory the Trash Heap.

If ever there was a momma you wanted to throw from a train, it’s Cersei Lannister.

“The King Slayer” comes off as a bad dude, but he’s noble at heart, which makes him just like Anakin Skywalker.

Though he really needs to get to telling those kids he is their father (insert Vader breath here).

And here’s one of those kids now. Without Cersai’s guidance, King Tommen can’t even leave his room. What a momma loving geek!

Plus, before Margaery threw herself at him, he’d never bagged a babe. He is not a stud.

Margaery Tyrell made sure Sansa got the boot so she could marry King Joffrey. After his demise she set her sights on kid brother Tommen who she took great pleasure in seducing.

As a bodyguard and enforcer, Bronn is a lot like Mr. T.

Don’t give him no backtalk, sucka!

A lord of destruction looking to conquer Castle Grayskull?

This freak just can’t be tamed. Give this Priestess of the Lord of Light an inch, she’ll take your first born.

She is one hungry, hungry hippo.

More than just the Hand of the King, Davos is gentle, wise and knowledgeable just like Papa Smurf.

Pretty sure even Papa Smurf couldn’t whip up an elixir strong enough to get Stannis out of the trouble he’s in though.

Oh, Shireen. Poor Shireen. She was not invincible! Billie Jean may have likened herself to Joan of Arc but it was Shireen whose story line actually went up in in flames.

Fair is most definitely not fair!

Did we miss someone. Do you have a better idea for 80’s icons who align with these characters. Please comment below or tweet us.