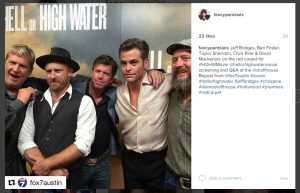 Earlier in the day, Pine walked the red carpet and announced he’s a “huge Mexican fan” and saying he had eaten at Torchy’s Tacos earlier in the day. According to Eater, he ordered the brisket-filled Crossroads and the off-menu The Hipster, of which he liked the fried ahi and cilantro combination.

The Drafthouse’s new Austin Creative Manager posted some snaps and instagram pics at the event, which occurred on her very first day on the job.

Sound like the PERFECT kind of job for me! Alas, I missed that posting.