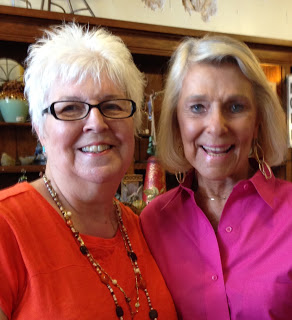 Sun City, Texas, resident and mother of superstar Matthew McConaughey, Kay McConaughey / McCabe, also known as K-Mac (not sure about the correct spelling of said nickname), was out on the Georgetown square signing copies of her book I Amaze Myself.

It’s not ATX Gossip’s first run-in with Matty Mac’s mama. One of our staffers escorted her down the red carpet at the Bernie premiere in Austin. You can read all about that encounter HERE.

But this time, it was MY mother who had the encounter with the author and women’s rights advocate.

When she spotted Kay at La Bella Casa, she stopped in to snap a pic and chat, telling Kay that she would try to get her some publicity on ATXgossip.com.

According to an interview the author gave during SXSW in 2012, Kay penned the book to tell stories to and about her kids and some of the things she’s gotten away with over the years. Things, she says, she has no shame about. In the book. she also reveals that her first husband died while making love.