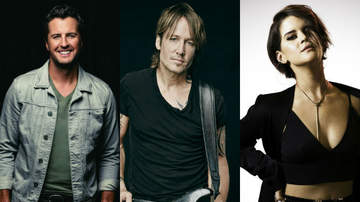 The iHeart Country Fest is mere days away which means a slew of country music stars are headed to Austin.

And that’s not all, part-time resident Bobby Bones is also back as host of the big show. And now, not only can we call him a radio star, he’s a legit TV star as well. Bones serves as a mentor on the new season of American Idol, currently airing on ABC.

And he’s not the only one with Idol ties who will appear at the fest. Current judge Luke Bryan will perform as well as former judge Keith Urban. Plus, former finalist Lauren Alaina takes part in the free daytime village.

Congrats to @laurenalaina on her ACM Award. She is one of the sweetest singers I have met. We crossed paths twice. First, on the day of the American Idol finale when she vied for the title with Scotty McCreery. The second was just a couple of years ago when she opened for the Raging Idiots. So warm and down to Earth, not to mention talented. Not surprised at all that she has been named the @acmawards New Female Vocalist of the Year. 👏🏼👏🏼👏🏼

The rest of the daytime performances include Brett Young and Luke Combs (both also appearing on the main stage), Dylan Scott and Danielle Bradbery, who won season 4 of NBC’s The Voice.

Admission to the daytime village is first come first served starting at 1 p.m. through 5 p.m. Performances start at 2 p.m.

The official festival site still hints that there may be surprise performers as well.

Can’t make it to the fest? iHeartRadio has you covered. You can watch a free live stream of the iHeartCountry Festival on Saturday, May 5th, starting at 7 p.m. CT on the @ATT Twitter account, or listen live on iHeartCountry Radio online or via the iHeartRadio app. Of course, ATXgossip will be there as well so you can follow along on our adventures that night via our Insta stories on the ATXgossip IG page.

The iHeart Country Festival is sold out, but select tickets behind the main stage, where you can still listen to the performances, are available here.