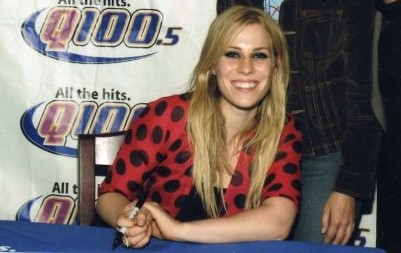 It’s South by Southwest time… or as I prefer to call it Stalk by Stalkwest. Unfortunately, I missed the opening festivities of SXSW 2008 as I was blazing a board down the slopes of Aspen. No celeb sightings there. I guess all the stars are setting over Texas this week.

Ryan Cabrera was on the Bobby Bones Show this week and I have to be honest, he has a decent voice – especially for 9am! I’ve always thought he was a hack – but that may have more to do with the fact that he dated Ashlee Simpson and was on that lame reality show. Now, he’s dating Elvis’ granddaughter, which kind of creeps me out because they started dating when she was like 16 or 17. But then again, didn’t Pricilla start dating Elvis when she was 14? I guess pedophilia runs in the family.

I missed Natasha Bedingfield’s earlier segment on the BB Show. I covet

her style – and her voice isn’t bad either. She performed a small show in Atlanta a couple years ago and I met her briefly. She seemed like a very cool chick. In case you missed the recent feature on her in People Magazine, she always steals slippers from hotels. Good to know.

Helen Hunt premiered her directorial debut Then She Found Me at SXSW over the weekend. She is looking SO much better. I saw her a couple years ago and I thought she had hijacked Robert Redford’s face. Luckily, she found some much needed rest – or a plastic surgeon.

Harold and Kumar hit the ATX accompanied by NPH. They spoke to a reporter from our local FOX affiliate – or rather, spoke AT him. The reporter seemed to serve more as a bystander of an interview gone wild than an actual participant in the exchange. For the record, he tells me the sequel is funnier than the first.

Brangelina are still haunting the Austin area. Pitt is shooting the Terrence Malick directed drama Tree of Life with Sean Penn. Not sure if Sean Penn is even in town yet since he’s gotten absolutely no press. The paparazzi shy star is probably pretty happy to be eclipsed by the expectant couple.

Speaking of Sean Penn, did y’all hear about the remark JT made about Madonna at the Rock ‘n’ Roll Hall of Fame induction ceremony in NYC on Monday night. Upon introducing Madge, Justin said, “The world has always been full of Madonna wannabes and I might have even dated a couple. … She [Madonna] has still found time to kiss someone I may or may not have publicly kissed myself. Of course you know I was talking about Sean Penn.”

I’m headed to the Austin Music Awards tonight and planning to plant myself amid some hot gossip areas this weekend, so check back soon for the some snarktastic new dirt.