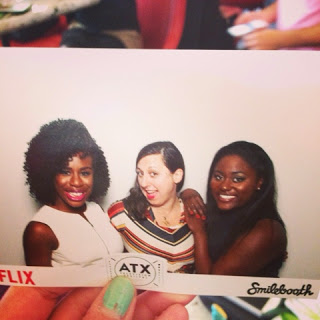 Some of our favorite moments at this year’s ATX Television Festival were never really documented. So, on this particular Throwback Thursday, we think it’s time.

One of our highlights was most definitely meeting cast members of Orange is the New Black. Those ladies know how to have FUN!

Uzo Aduba (Suzanne “Crazy Eyes” Warren) is incredibly lovely and intelligent in real life while Lea DeLaria is basically a less criminal version of Big Boo. Danielle Brooks, who plays Tasha, is always down for a good time (just follow her instagram). Post fest appearance, she snapped a pic on a mechanical bull.

Former Party of Five and My So Called Life star Wilson Cruz was also in attendance. Cruz revealed that pal DeLaria is a phenomenal jazz singer and, like any good friend would do, he then pulled up this YouTube video of her showing off her skills.

Cruz and fellow festival participant Shane Harvey, who are both pretty great musicians themselves (Michael has an album out and Wilson started in Broadway’s Rent), spent the night bellowing out tunes at Ego’s Karaoke bar.

But our favorite moment of the fest was rubbing elbows with the Fonz.

And what did he do next?

He went Franklin BBQ, of course, along with Michael Rauch, the producer of Royal Pains.

Winkler even called ahead from Hollywood to make sure the famous BBQ joint could save him a dish.