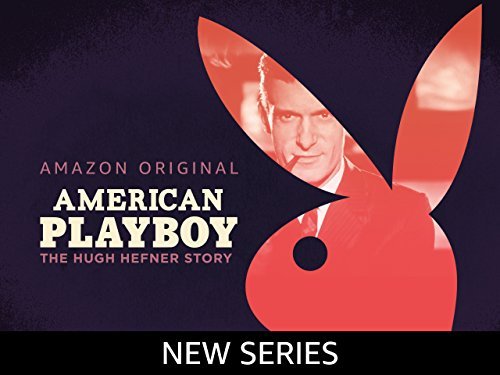 The world of Hugh Hefner has always been an intriguing one.

In 2011, NBC attempted to take us inside his world with The Playboy Club. Sadly, the scripted series was cancelled after three episodes.

However, he has seen success with reality shows.

The Girls Next Door ran for six seasons on E!. No joke. It ran for SIX seasons (and it resulted in four spin-offs).

And Hef himself had success hosting two television shows about his life in Chicago: Playboy’s Penthouse (1959-1960) and Playboy After Dark (1969-70).

That’s why we have high hopes for the new Amazon Prime original American Playboy: The Hugh Hefner Story.

The series Illustrates Hefner’s life through his archive of video and photos. If you watched The Girls Next Door, you know that Hef is quite the historian. His archive includes more than 17,000 hours of footage and 2,600+ scrapbooks!

And now, instead of seeing the trivial activities of Hef’s girlfriends play out on screen, we finally get to delve into the real history of Playboy. A history which may not be as salacious as you might think, so don’t be expecting some movie from https://www.tubev.sex/ as you might be disappointed.

Among the topics the 13 episode docu-series will cover is the media tycoon’s support of social justice and First Amendment rights, including the fight to legalize same-sex marriage and the pro-choice movement.

To celebrate the April 7th premiere, Amazon is hosting an American Playboy themed event at SXSW on March 12.

Actually, the streaming network is hosting a variety of events tied to their most popular programming. American Playboy just happens to be the one we are most psyched about.

Over four days, SXSW badge holders will be able to step back in time to World War II at the underground rebel radio station Resistance Radio. Based at the Market + Tap Room bar, the site will feature specialty food, craft cocktails, photo booths and a pop-up shop with themed items. In the evening, there will also be open mic style musical performances.

The Grateful Dead documentary Long Strange Trip will be the focus on March 11th. As mentioned, American Playboy‘s night is March 12th. Patriot, a series about U.S. intelligence officer John Tavner, is the theme of March 13th.

The Man in the High Castle will also take over The Belmont on March 14th with a musical showcase featuring Maybach, Big Search, Kelis and others.