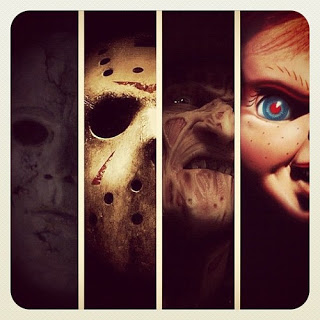 It’s that time of the year again… time to light some candles, snack on something pumpkin flavored and cuddle up under a blanket (depending on where you live) to watch one of your favorite scary movies.

Need help making a selection? Have no fear, the ATXgossip girls are here to help you make that terrifyingly difficult decision.

But first, let’s hear about the classic TV series that frightened Dani as a child.

And now that we’ve gotten that out in the open…

Because who doesn’t still hear Carol Anne being beckoned toward the light?

When you think Alfred Hitchcock thriller, your mind goes to Psycho And while that flick is spooky, having your eyes pecked out by birds is much creepier.

This choice comes from Disney. Sure, laugh it up… but then try not to be haunted by these damn Bette Davis eyes.

The IMDB synopsis for our next film starts, “A group of nine college students staying at a friend’s remote island mansion…” and we’re giddy that the latest installment of MTV’s The Real World is on our list of scary. Squealing giddy.

We read on and sigh with disappointment.

For the ATXgossip girls, the lambs are most definitely still screaming. And don’t get us started on Buffalo Bill. Sweet Precious.

This is by far the best video of the bunch. And that’s not because of the movie choice.

While this movie is amaze balls (see what we did there?), the best thing about this video occurs at 2:25. Feel free to skip ahead.

First, refer to the general rule outlined in #7. Also, I see drunk people.

No, that’s not a slip on the most memorable quote from our next pick – The Sixth Sense. It’s Dani’s cry for help after some hilarious and unexpected guests continue their video bombing of our tribute to Halloween.

The video clip for our final choice seems to be missing in action.